I saw some commentary on pumpkins recently debating whether our obsession with them as soon as September hits (as evidenced by flavored lattes and every sort of pumpkin-y baked good) is justified by true pumpkin appreciation or rather spurred on by a trendy flavor fad akin to the hype around bacon and cupcakes.  I have to admit, I bristled at the suggestion that instead of actually liking pumpkin I was merely drawn to the sugar, spices, and nostalgic memories that come with it. 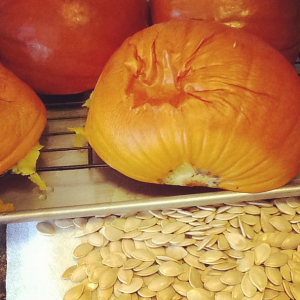 The sweet consequence of all this pumpkin debate was that it put me in the mood to make pie, pumpkin pie.  My grandma always sourced the pumpkins for her thanksgiving pies from her extensive garden.  Despite the fact that many people claim not to know the difference between canned vs. fresh pumpkin pies, I stick to making fresh puree like grandma.  Making your own pumpkin puree takes a little time, but it’s easy and in my opinion worth the effort.  Just make sure to select a sugar pumpkin (your standard jack-o-lantern variety won’t work well here). 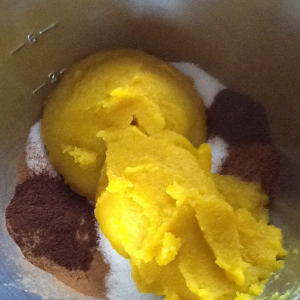 Cut the pumpkin in half, scoop out the seeds, and roast at 400° until a knife can poke into it with no resistance.  It will take about an hour, and make sure to use a rimmed baking tray since the pumpkins will release water and hot messes are best when they don’t involve ovens.  When cool, squeeze out as much water as possible, remove the skin, and give the pulp a good whirl in the food processor to break down the stringy fibers.  The result is a deeply orange, silky smooth puree that looked so appealing this past Sunday I couldn’t resist licking the spatula.  Which is when i discovered….

There are many varieties of winter squash that have a lot of flavor (the ones I like the most are dry, sweet, and nutty. Try Buttercup or Carnival).  Pumpkin is definitely not one of them, truthfully it’s pretty bland!  So my slightly bruised ego has been quickly redeemed.  What is wrong with loving pumpkin for the sugar and spice and comfort-food-coziness that accompany it when the pumpkin itself merely offers a blank slate for making such tasty improvements? I for one am not ashamed to admit that I like pumpkin better with cinnamon and sugar; and hey, just because I’ve turned it into pie doesn’t mean I’m not getting my fiber! 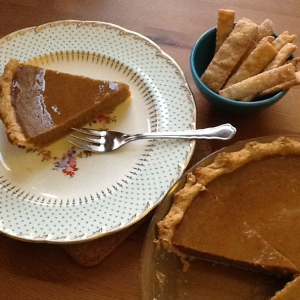 I usually stick to the traditional butter and shortening crust to go with pumpkin, but it would also taste great with a cookie crust made from gingersnaps, vanilla wafers, or chocolate wafers (if you like the pumpkin/chocolate combination).  Most pumpkin pies should be made in a shallow pie dish.  Using a deep dish will make for a sad, half-empty looking pie (not even a glass-half-full kind of person could find anything good about a pie-half-empty).  My Grandma only made her pumpkin pie for Thanksgiving, but I like it too much to stick to that tradition and make it several times each fall.  I know my sister does too.

Preheat your oven to 425°. Prepare your crust in a shallow pie pan and put it aside in the freezer* while you make the filling (or for a cookie crust, blind bake at 350° for 10 minutes).  Whisk together all the ingredients until smooth.  Place the empty pie crust on a rimmed baking tray in the oven.  Carefully poor the custard into the crust and close the oven door (pouring the custard into the crust on a counter and carrying it to the oven usually ends with me mopping pumpkin off the floor).  Bake for 15 minutes then reduce the temperature to 350° and bake for about 35 more.  The custard will puff up around the edges but still look slightly jiggly in the middle.  Don’t worry, it will set completely as it cools.  Overbaking can cause the custard to crack and split.  Let the pie cool completely, then store in the fridge.  Tightly wrapped, these pies freeze well if you want to make them ahead of time.  Serve with lightly sweetened whipped cream, reddi-whip, or cool-whip, whichever you prefer!  Enjoy! 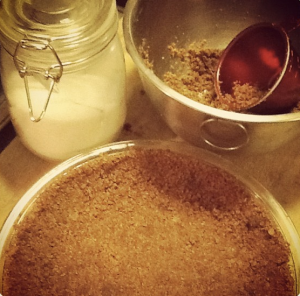 *As of this Thanksgiving, I’m done being lazy.  Grandma did use an unbaked pie crust, but the problem with baking a custard pie in a raw crust is that the bottom crust gets chewy and dense instead of flakey and light.  It’s much better to blind bake the empty crust filled with pie weights, or beans, or rice for 30 minutes (or until lightly golden) and then continue baking with the custard filling.  If the edges of the crust start browning too much before the custard is done, you can cover them with foil or a pie crust cover.

3 Responses to "Pumpkin on my Mind"