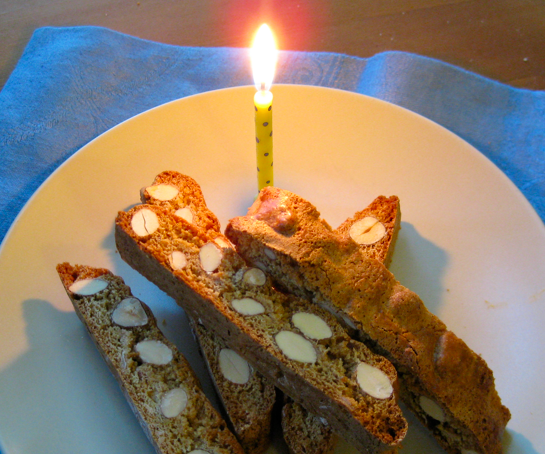 Happy Birthday blog.  For better or for worse, tonight I am announcing your existence on facebook.  I had visions of making something grand: princess torte transformed into cupcakes or perfectly executed french macarons.  But, to be honest, there are too many of you out there already that do those things so much better than I can with my unreliable half-pint oven and 1 sq. foot of counter space.  So instead I am celebrating with one of my favorite things; I made you some humble birthday biscotti.

After putting in 6 long days in a row in the lab last week, I yearned for a baking project and had a whole Sunday free for some much deserved baking therapy.  After a late breakfast at my favorite, tiny cafe down the street; i pulled up the blinds to let the sun stream in, turned on Pandora, and pulled out my kitchen scale.  (PS…this is what happens when you start dancing to Pandora while baking)

I did make macarons in anticipation of Mr. R and my upcoming trip to Paris, but I’m still working on the ratios and they aren’t ready to share yet.  And anyways, the ones in Paris are going to blow my mind.

Don’t get me wrong, biscotti are my favorite cookie.  It’s the thing I bake the most; I can throw in whatever random bags of nuts, fruits, or chocolate are hanging around; and I never feel like they are an indulgence to be avoided.  The texture of biscotti can range from soft and chewy (not biscotti if you ask me…) to dry and crunchy (perfect for dunking in coffee or tea).  Studded with toasted almonds and hazelnuts and warmly spiced with cinnamon, these biscotti are on the dry and crunchy side of things with no butter or oil to soften their texture.  And the best part of baking biscotti is that you get to eat the ends; because really, the end isn’t even a full cookie, not even if you eat them all! 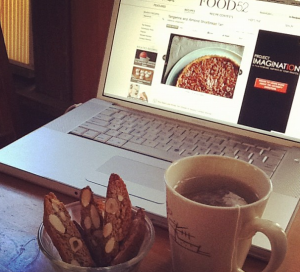 Preheat the oven to 300° and toast the hazelnuts and almonds separately for 10-15 minutes until they smell fragrant.  When you take the hazelnuts out of the oven, wrap them in a kitchen towel to steam for 10 minutes then rub them vigorously to remove as much skin as possible.  Set the nuts aside to cool and increase the oven to 350°.

Beat the eggs in a stand mixer on medium speed with the whisk attachment until foamy.  Add the orange zest and turn the beater back to medium.  Slowly pour the granulated sugar into the eggs and then turn to high.  Beat until the eggs have increased in volume and lightened in color but have not begun to form peaks.

Pour the eggs into the bowl of dry ingredients and begin mixing.  Continue mixing until a dough forms (you may have to get in there with your hands and the dough will be sticky, prepared to get messy!).  Split the dough into 4 pieces and roll them about 12 inches long on a lightly floured surface.  Place 2 logs on each cookie sheet and gently flatten them to about 1 inch high and 2 inches wide.  Brush the tops with the beaten egg.  Bake the logs 30-40 minutes, switching the trays halfway through, until golden and set.

Remove the logs from the oven and let cool until safe to handle but still warm.  Reduce the oven temperature to 300° and discard the parchment.  With a very sharp knife, slice the logs into 3/4 inch biscotti and return them to the cookie trays.  I like to stand them upright so there’s no need to open the oven and frantically try to flip hot cookies.  Let the biscotti bake 10-20 minutes more, the longer you bake them the drier they will get and they will continue to crisp as they cool. (inspired by and adapted from here)