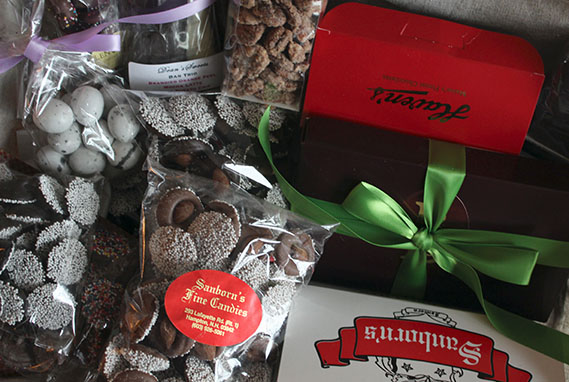 A couple weekends ago, my Dad arrived via Amtrak from MN to embark on our annual father, daughter chocolate tour. It coincidentally happens at the perfect time of year when the weather is still cold even though I’m so over winter and the chocolate shops are all gearing up for Easter and awash in chocolate bunnies. I had been thinking about whether our annual tradition would continue as early as December; so when my dad sent an email hinting at the same in early February, I proposed meeting in Madison to visit old stomping grounds. A week later when circumstances arose limiting my ability to travel, Dad bought a ticket on the Lakeshore Limited and Chocolate Tour Northeast V1.0 was born!

After a little internet research and some inquiring emails (one of which put me in touch with a business woman in ME who used to work for Gail Ambrosius and Le’Etoile in Madison), I planned a route for Saturday up to Burlington VT and a second route up to Portland, ME. While Mr. R got to accompany us up to Burlington, the Maine trip was considerably more productive in terms of density of shops per mileage and pounds of chocolates brought home. Read on for our itinerary and my favorite stops!

Although I had originally planned 5 stops for this route, we missed Dancing Lion in Manchester, NH and Daily Chocolate in Vergennes, VT due to timing.

Laughing Moon Chocolates (Stowe, VT) smelled right as we walked through the door and chocolate makers were in plain sight pouring tempered chocolates into molds in the small production area. The store set up was a bit disjointed and the chocolates were rather pricey (over $30/lb). After 3 hours of driving, it was okay but didn’t give me that giddy Chocolate Tour rush that usually sends me bouncing up and down and skipping out the door of the first shop before even eating a bite of sugar. Mr. R pronounced their truffles decent. The shell of chocolate is rustically thick and encases a slightly grainy ganache that is well flavored and not too dense.

Lake Champlain Chocolates (Burlington, VT) was another hour up the road. You may recognize them as Whole Foods is their largest customer, making their wares available in all 50 states. While their chocolate bars are commonplace, the factory store had a display of truffles and confections not available at your local Whole Foods. Mr. R judged their truffle too big and too dense, but some of the smaller pieces were more successful. The best part of this store was the wall of seconds with various minor packaging or enrobing flaws sold at a discount. Even though they started out as a small town company, their growing ubiquity left me still hunting for that chocolate tour feeling only satiated by a little local gem.

Snowflake Chocolates (Burlington, VT). Just across town from Lake Champlain (via the shortest freeway ever according to Mr. R, measuring in at 3/4 mile) is Snowflake chocolates. With its wooden, glass-fronted display cases and baskets of bulk candies, Snowflake felt the most like the Wisconsin shops. While the dark chocolate has a good semisweet flavor and my molasses chip was a beautiful honeycombed specimen tasting of warmly caramelized sugar, steer clear of the milk chocolate especially the ones with fudgy fillings which were tooth-achingly sweet. 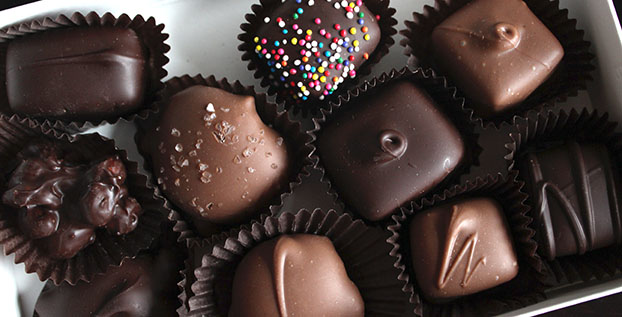 The coastal route is where it’s at! While skipping the shops catering to the summer beach crowds (which often don’t even make their own chocolate) and the traffic jams up Route 1 caused by said summer beach crowds, we found four wonderful shops with a lot less driving than Saturday.

Sanborn’s Fine Candies (Hampton, NH) was what I was waiting for! Glass fronted cases of nut clusters, caramels, peanut butter cups, and barks; Easter bunnies lined up anywhere they fit including the rafters; and tables full of all sorts of bagged chocolates. I grabbed a pack of fruit slices which Mr. R declared high quality and filled a 1 lb box of chocolates without any trouble. The best find in the store were the dark and milk nonpareils studded with a single almond each. They were so good, we stopped back in on our way home 5 hours later to grab another bag. I was hoping we wouldn’t be recognized, but I was out of luck. The best kind of compliment we could have paid them, said dad! 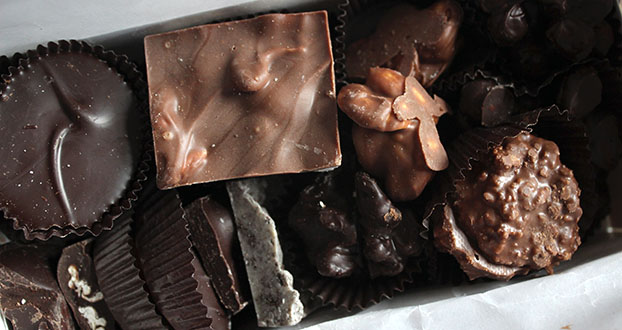 Byrne & Carlson (Portsmouth, NH) is entered by way of an inviting green door set into a brick facade right off the sidewalk. I feared it would be too fancy and maybe a bit snooty, but the warm and welcoming charm of the little shop upon entering is undeniable. I was ever so careful in selecting my chocolates, but could have easily and happily spent more in this little shop. I filled a baggie of marzipan eggs from a jar, selected some chocolate dipped pate de fruit and a peanut butter cup for good measure from the case, and chose a couple small tasting bars. As dad finished selecting his wares, the grandmotherly sales woman removed a slender clear box from the case and presented it to us for inspection with a glimmer in her eyes. A seasonal special of 3 hand-painted, white chocolate asparagus filled with a hazelnut praline made especially by the owner in limited quantities for Easter. Dad and I balked but quickly gave in when I whispered how much my Omi (who reminisces on the white asparagus of her girlhood in Germany every spring) would love them. The sales woman seemed highly satisfied. 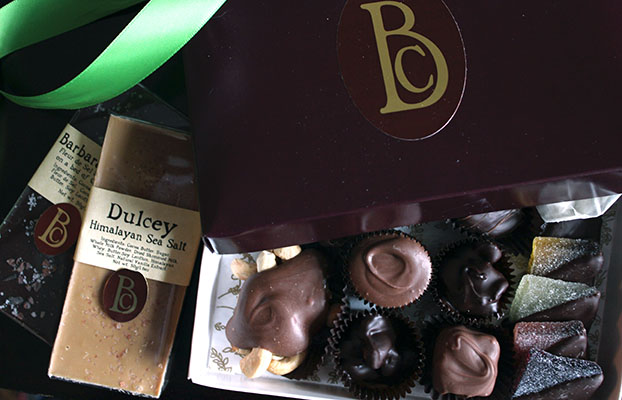 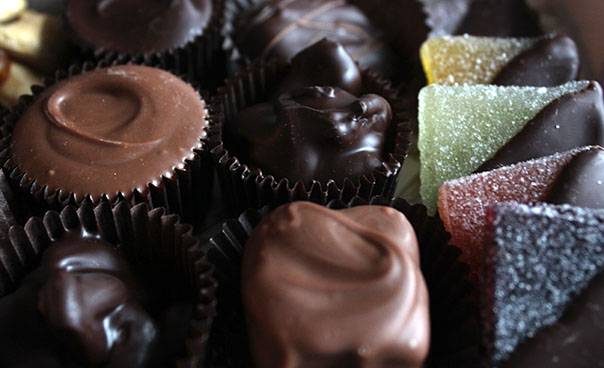 Dean’s Sweets (Portland, ME) was the smallest store we visited. Not bigger than some walk in closets Mr. R and I have seen at recent open houses, the store sold only truffles, not more than 2 dozen varieties. I felt compelled to buy a few, but aside from the maple cream filled tuffle, I was not super thrilled by these chocolates especially at the $2 a piece price tag.

Haven’s Candies (Portland, ME) felt a lot like Seroogy’s in De Pere, WI. The ambiance of the store is not super, but the chocolates hit the spot. I brought a couple meltaways home to Mr. R to try. East Coast meltaways are no comparison to the Wisconsin candy of the same name, but these were the closest we came. Haven’s also apparently stays afloat through a wholesale business to many of the beach front candy shops during the summer season.

Len Libby (Scarborough, ME) is a charmer! A 30ft (at least) case full of chocolates, candied nuts, boxes of creative barks, and a life size 1700 lb milk chocolate moose standing in a white chocolate pond. The chocolate is ample, attractive, and tasty. Only the 90-yr-old man in the store with his daughter would have the power to resist just one chocolate! When I’m 90, I hope I’m sane enough to accept any and all chocolate free of inhibition.

645 miles (10 hrs 16 min of driving time according to google maps), 8 chocolate shops, and two bakeries later, we both called it a complete success! 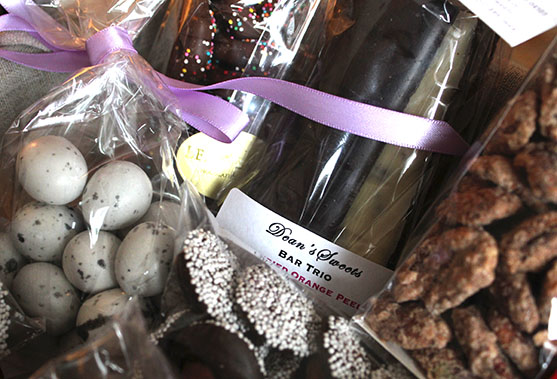