Every once in a while I have an “OMG!” moment when I learn or realize something completely new or totally unexpected. A few things that have caught me off my guard in the past:

Last year for my birthday Mr. R gave me the beautiful Bouchon cookbook by Thomas Keller that inspired one of those “OMG!” moments. Actually it was one of the biggest moments I’ve had in a long time, one I still have mini “OMG!” moments over whenever I think about it. While flipping through the gorgeous pages, I came upon a recipe for “French Gnocchi”. Italian gnocchi have never really excited me. Made of potatoes bound together with flour, they are white starch plus more white starch (though not as brazenly guilty of the sin of layering starches as macaroni & cheese pizza). On top of that, unless you know what you’re doing, those little buggers can be tricky to make and are more likely dense and doughy than pillowy and light. 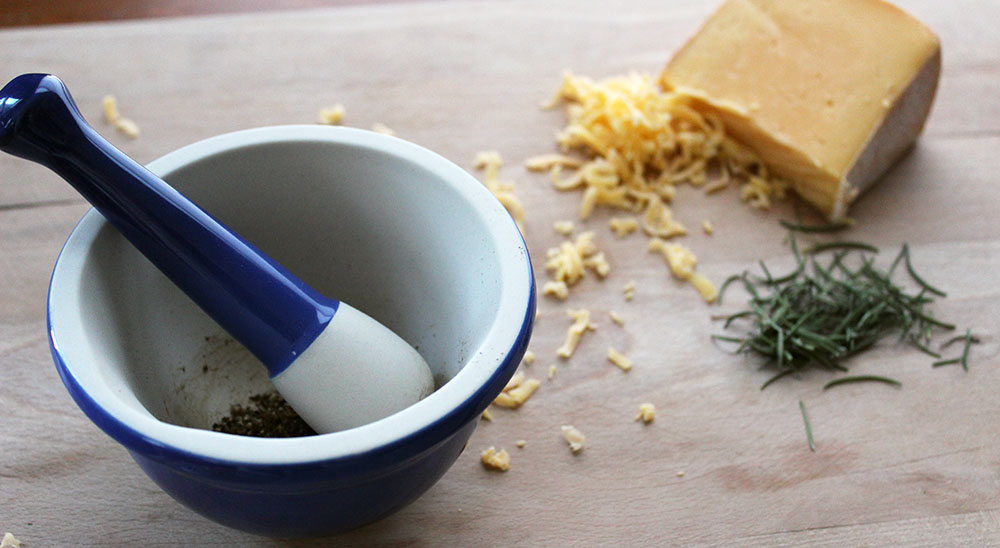 So when I came upon the gnocchi recipe, I almost flipped the page with a “meh, gnocchi” when something caught my eye and made me pause to read the headnote. Suddenly, French Gnocchi sounded way better than their Italian counterparts; like “I need to make these now!” better.* Instead of potatoes and flour, French gnocchi are made with Pate a Choux, which when piped and baked creates the base for sweet treats like eclairs, chouquettes, and cream puffs. For gnocchi, the choux is first blanched in a pot of boiling water and then sauteed in a little butter or olive oil to finish the cooking and brown them up nicely. From there you can be as creative as you want with them. Swap them for noodles in a batch of chicken noodle soup, add a menagerie of sauteed vegetables for a comforting meat-free meal, or simply sprinkle some extra shredded cheese on top and enjoy them as is. I’m dreaming of substituting them for spätzle in käsespätzle… 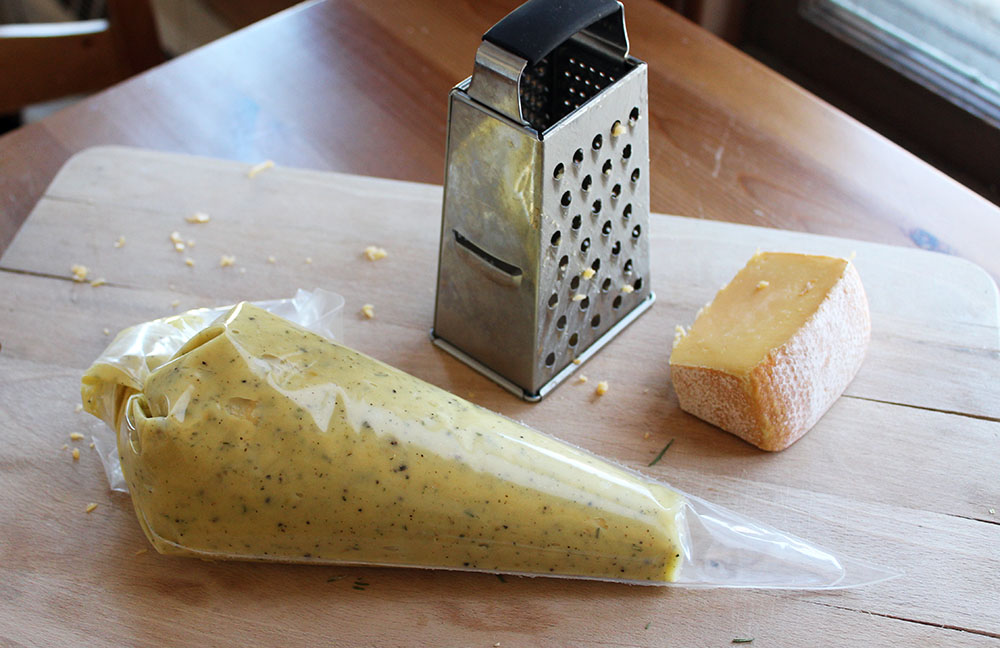 I’m not a huge fan of the savory desserts that are popping up on restaurant menus. I’m not against the idea or the creativity involved in making savory components work in dessert, it’s just not my thing. Cheese flight? No thanks. Bacon fat gelato? Nope. Fried potato dumplings with candied eggplant? I think I’ll go get Dairy Queen. On the other hand, use a workhorse from the pastry kitchen like Pate a Choux into your dinner menu? I’m sold! 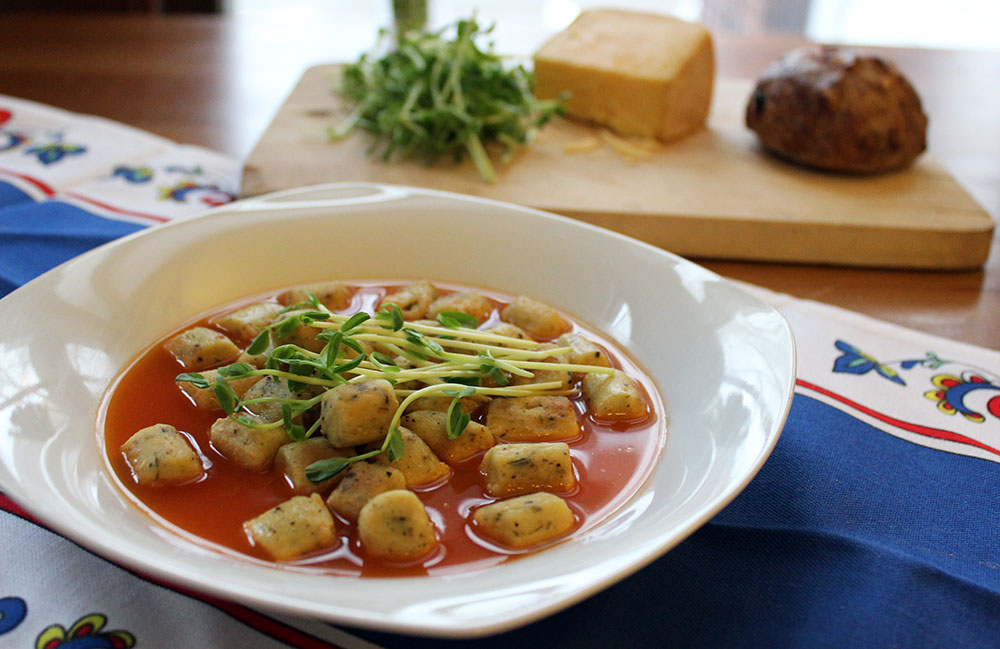 French Gnocchi (adapted from Bouchon by Thomas Keller)
This recipe makes a lot of gnocchi. After they are poached and cooled, you can freeze them for later. Let them thaw before using. You can be creative and change the flavor profile of the Pate a Choux by varying the spices, herbs, and cheese. Make sure to use a cheese that is soft enough to incorporate smoothly into the dough. I’ve used a 4-yr creamy gouda and a soft swiss style cheese both with excellent results, especially when served in a bowl of this tomato broth from the smitten kitchen.
6 Tbsp butter
3/4 Cup water
2 1/2 tsp salt
1 Cup flour
1 Tbsp spicy mustard
1 Tbsp ground black pepper
1 Tbsp ground rosemary (dried or fresh)
1/2 Cup shredded cheese
4 eggs

Prepare all your ingredients: grate your cheese, measure your flour, prepare your herbs and spices and put the all at within reach. Put the butter, water and 1 tsp salt in a medium pot over medium-high heat and cook until the butter is melted and the mixture begins to boil. Turn the heat down, add the flour, and immediately stir. The dough will form a stiff, dry-looking ball. Continue to stir the dough over medium heat for a few minutes to dry it out even more. The dough should hiss and steam but don’t let it brown. Remove the dough from the heat and put it in the bowl of a stand mixer (you can do this next part by hand with a wooden spoon too, but be prepared for a major arm workout…)

Using the beater attachment, mix in the mustard, spices, herbs and the remaining 1 1/2 tsp salt. Beat for a minute or so to release some heat, then beat in the cheese. Beat in the eggs one at a time. At this point the dough should still be stiff but will have a slight flow to it when you raise the beater. Put the dough into a large piping bag (or a ziploc) and let it rest at room temperature for 30 minutes.

Bring a large pot of salted water to a boil then reduce the heat just to maintain a simmer. Line a baking tray with paper towels next to your pot of water and get out a slotted spoon or spider and a sharp paring knife. Cut a ~1/2 inch diameter hole in the tip of your piping or ziploc bag. Rest the piping bag on the edge of the pot and begin piping the dough, cutting off pieces about an inch long into the water. Only pipe about 30 at a time so you don’t crowd the pot. Let all the gnocchi rise to the surface and then poach for 2-3 more minutes. Remove them with the slotted spoon to the paper towels and repeat until all the dough is used. Put all the gnocchi on a clean baking tray and let rest in the refrigerator for 30 minutes or more. At this point you can freeze them for later.

To finish the gnocchi, heat a Tbsp (more or less depending on how many you are cooking) of butter or olive oil (or a combination) in a skillet or frying pan. Add the gnocchi and saute until they have all browned nicely and serve as desired. 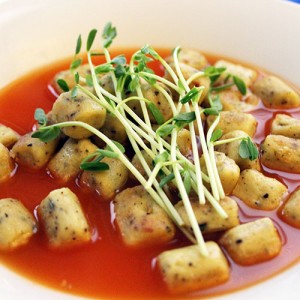 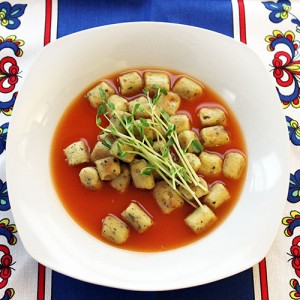 *Dad, are you shuddering? How many times did you try to get me to stop saying “like”, but I’ve never fully outgrown it. A leftover from the decade in which I grew up, I guess.

4 Responses to "On the Savory Side"