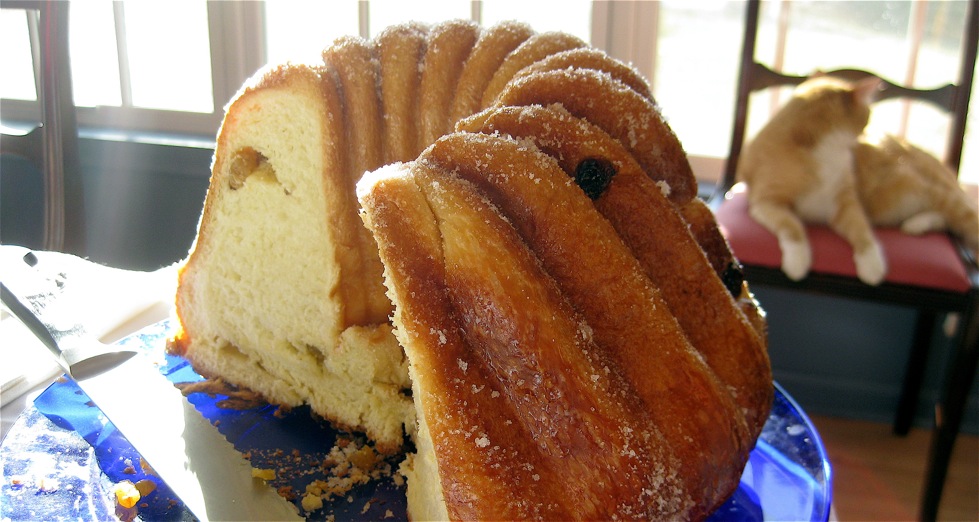 So many recipes have been floating around in my head since getting back from Paris. Actually, more like racing; bouncing around in there with some sort of frenetic, eager energy like my cat* when he decides to race back and forth in my 2-room apartment. He builds up more speed in the 25 ft span between my bed in one room and his water fountain in the other than I would think possible for a 14 yr-old, previously obese kitty. Then he skids to a halt or makes an agile midair u-turn just when he reaches maximum velocity. That’s how it feels with these recipes dominating my thoughts since Paris; except that I instead of just one, I have at least 3 recipes being crazy in my head!

The first recipe to try was the Kouglof; too similar in name and shape to my favorite German cake, the gugelhupf, not to be related. It was by far my favorite treat of the trip; fluffy, sweet, buttery, soaked in an effervescent orange flower syrup, and covered in sugar. (If you want to get really hungry, I wrote more about it here a few weeks ago.) When I wrote to my Omi about that breakfast, she immediately opened up her tattered, 1950′s era Joy of Cooking and found it! I have so many cookbooks on my shelf that I sometimes forget how much a stalwart the Joy is. Thankfully, being merely a cookbook, it can’t be offended that I am not so loyal to it as it is to me.

Here’s what the Joy has to say about Kouglof:

“Not as rich with butter as brioche, this slightly sweet decorative loaf comes from the Alsace region of France. Kouglof should be baked in a fluted ring mold. An earthenware mold is traditional, but metal or glass molds work just as well. The mold helps the kouglof to bake evenly; you can also use a plain tube or bundt pan. This makes a wonderful breakfast bread.”

With this recipe and another I found here, I went about planning my first attempt to recreate our delicious Paris morning. First there was the issue of timing; the size of Kouglof that would come out of my Gugelhupf pan, and the time and care necessary for making a yeasted dough meant I needed a special occasion and a lot of people to help me eat the results. A perfect project for a cheery Thanksgiving morning breakfast at home in Minnesota, I decided. Second, the issue of how exactly to make it. Neither of the recipes I had were exactly what I wanted, but both of them offered a good starting point. So I ended up cobbling together a couple recipes and a bunch of improvisation and baked my first Kouglof. So beautiful! So divinely delicious! So Proud!

I can’t say I won’t play around with the recipe in the future to more closely mimic the Kouglof at Vandermeersch, but this first attempt was far from shabby and will certainly stay in my recipe box. Between the six of us, we ate almost three quarters of it that day and polished it off toasted the next. I totally recommend hosting a weekend breakfast just so you have an excuse to serve this bread! 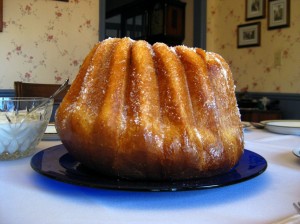 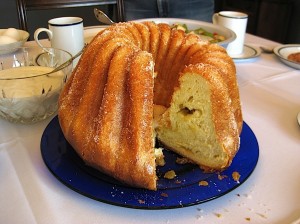 Place the raisins in a bowl and zest the lemon over them. Pour grand marnier over the raisins just to cover; you want enough to moisten the raisins, but not so much that you’re wasting the good stuff! Cover the bowl and set aside for later.

Heat the water in the microwave on high for about a minute. Stick your finger in to check the temperature. If it feels warm but not so hot that you want to pull your finger away, it is good. Sprinkle the yeast over the warm water, sprinkle in a little sugar, and give everything a little stir. While you are waiting for the yeast to activate, mix the flours, salt, and sugar in a stand mixer. Once the yeast is bubbly, add it and the 5 eggs to the mixer. Mix everything on slow speed with the dough hook until it all comes together. It will take a while and look dry and shaggy. 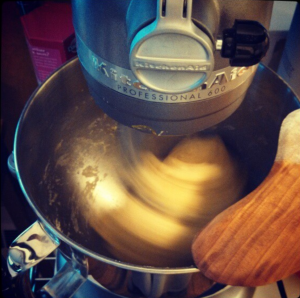 Start adding the butter one or two tablespoons at a time. Let the butter disappear before adding more until all the butter has been added. Raise the mixer speed to medium and knead for an additional 15 minutes. The dough should be soft and smooth. When you grab it and pull, it should stretch without immediately breaking and bounce back when you let go. Place the dough into a large bowl, cover with a dish towel, and let rise until doubled (2-3 hrs).

Grease a large Gugelhupf or bundt pan. Remove the dough from the refrigerator and put it on a board. Drain the raisins, reserving the grand marnier. (I didn’t need any flour but if the dough is sticking to the board feel free to use a little.) Punch the dough down again and flatten into a rectangle about 1 inch high. Spread half the raisins over the dough and fold them in. Fold the dough over itself a few times then flatten again and add the remaining raisins.  Fold the dough several times until the raisins are incorporated. Massage the dough into a ball then pick it up and find the center of the dough with your thumbs from the bottom. Carefully push your thumbs through the dough and form a hole in the center big enough to place the dough into the prepared pan. 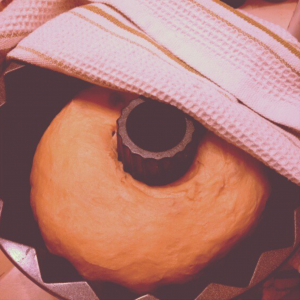 While the bread is baking make the simple syrup. Place 6 Tablespoons sugar into a small pan and cover with the leftover grand mariner plus water to 6 Tablespoons. Bring the mixture to a boil then remove from the heat.

Let the Kouglof cool for 5 or 10 minutes then turn onto a plate. Using a pastry brush, paint the bread with the simple syrup and sprinkle with extra sugar. I used granulated sugar to give a sparkly appearance, but dusting with powdered sugar would be an easier and less sticky endeavor…

Finally if you can get over what a beautiful thing you’ve just made, slice and serve! Enjoy!

*disclaimer: I was home for Thanksgiving and the cat posing in the picture is my brother’s not mine.

**Sometimes putting dough in the fridge overnight can make for a stubborn second rise. Make sure you have the dough in a warm and draft-free spot. You can wrap the pan in one of those microwaveable heat packs made for aches and pains to wake the yeast up. If it’s still being stubborn, you can help the dough proof by making a sauna in your oven. Pour a couple teapots of boiling water into a pan placed on the bottom rack and put your bread on the upper rack. Close the door and let the steam warm the dough.