I have a confession to make.

I know…I just started this blog…what on earth I would have to confess so soon??  It’s a bold way to begin a post; perhaps it’s even making you a little nervous.  Am I going to tell you something too personal?  Something incredibly awkward?  And what’s probably driving you nuts by now is that I’m dragging it out, I still haven’t said it…  So, here goes; here’s what I need to say before we go any further:

That’s it; that’s what I needed to say.  Maybe you guessed it earlier when I was feeling nervous about posting recipes that didn’t meet my standards; when I made 3 batches of pumpkin oatmeal cookies in a 24 hr period until I was happy enough with the recipe to share it.  My parents have always known it.  What to say when my report cards had an A-?  Praise me and I’d beat myself up for not doing better; ask what happened and I’d immediately be on the defensive, accusing them of expecting too much.  I know now that it’s all mine; the expectations, the high standards, the deflated feelings when I don’t do as well as I think I could or should.  I think it’s only fair to tell you about this now.

When it comes to quilting, i get some respite from my Type A personality.  Corners don’t exactly match up? Hand stitching not perfectly even? Small puckers in the layers as they get quilted together?  For some reason I let it all slide; it doesn’t bug me, the end product is beautiful, and I’m proud to gift it to the next baby-expecting set of parents on my list. 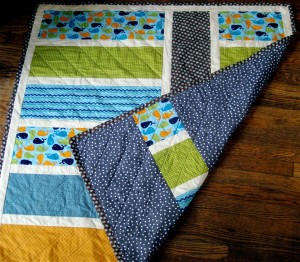 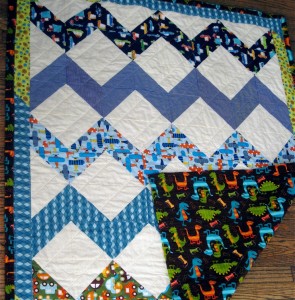 But when it comes to baking, I can’t let it slide.  Nothing slides.  Which is why I can’t bake from mixes.  It’s an empirical truth: scratch baking is better than mixes.  100%, all the time, no exceptions.  Or at least that’s what the perfectionist in me says.

Mr. R will recall a specific grocery store trip a while back.  We were going over to some friends’ for dinner, and I had offered to bring a key lime pie.  Now Mr. R lives in Chicago (a sacrifice we’re making while I finish my degree) but all my baking tools are in Madison.  This posed a problem: I wanted to make a graham cracker crust, but my food pro and pie plate were both 140 miles away.  Of course, there is an obvious solution: Keebler sells a premade graham cracker crust that comes in it’s own aluminum pie plate.  I stood there in the aisle staring at the pre-made graham crust in my hands.  Finally (hesitantly, guiltily), I put it in the cart and purposefully strode towards the dairy section.  We only made it half way down the aisle.  I grabbed the crust, rushed it back to it’s place on the shelf and smoothly grabbed a box of graham crackers without even stopping as I walked back to the cart and plopped them in with a sigh of relief.  That was a close one…

When it comes to baking I’m not the only one that knows a bit of perfection pays off.  So many little variables can change your final outcome.  Often these are variables you can’t even control: the humidity in the air on any particular day, or the way that your flour was milled.  It’s why I stick to using King Arthur Flour.  They’ve got a bit of a perfectionist streak too.  Their flour is milled to the strictest standards with the tightest tolerances in the industry.  If that’s starting to sound to technical, what it means for you is this: the KAF flour you buy today will perform the same as the KAF flour you buy a month, 3 months, or a year from now.  You won’t be left puzzling over why your favorite cookies came out too dry or too flat when you swear you didn’t change anything!

Two weekends ago I went out to visit Boston (don’t ask why, it’s complicated and the answer doesn’t matter right now).  One of my favorite baking/quilting friends lives in the area and we had planned a road trip up to the King Arthur Bakery and Store in Norwich, VT.  They’ve just completed a massive building project; completely expanding and revamping their store, cafe, and teaching facilities.  I was eager to see the new digs and to stock up on supplies in preparation for the holiday baking season. 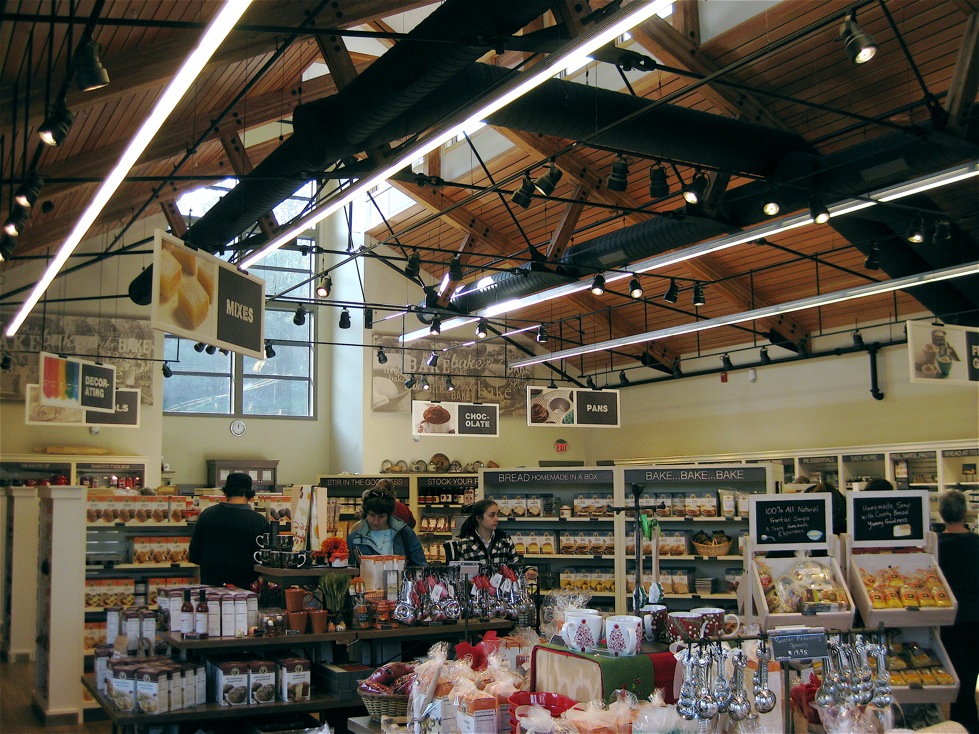 Unfortunately, after the 2 hr drive, KAF left me a little disappointed.  The black bean soup at the cafe was a perfect lunch, the almond cloud cookie still my favorite, spying on the bakers through the big windows a new treat.  But the store left me feeling rather betrayed, jilted by the pervasiveness of boxed mixes in every aisle.  Scones, yeast breads, sugar cookies, pound cakes…everything available in pre-mixed, boxed form!  Just grab a stick of butter, an egg, maybe some milk; exert some minimal effort, and Viola!

I was confused, how could they do this to me? How many surveys have I sent back saying I only bake from scratch?  KAF, aren’t you listening to me?  Okay, I get it; not everyone bakes from scratch, not everyone even bakes.  So you’re making baking accessible to non-bakers, offering the opportunity to have warm, fresh, tasty treats in every home.  All well and good I decided, but only if those boxed mixes give good results.  For a company that claims to have the best flour in the industry, I expect no less of their mixes.  There was only one solution; swallow my pride, guilt, and those tiny shudders of distaste and put a few boxed mixes in my basket (I made Mr. R do the actual check-out transaction…).

This weekend I tested the mix for French Toast Scones.  As a fair comparison, I tried to pick a scone recipe from the KAF on-line resources that most closely matched the ingredients listed on the side of the box.  I chose the cinnamon-eggnog scones, substituting buttermilk for the eggnog and using vanilla extract. Here’s what went into each recipe: 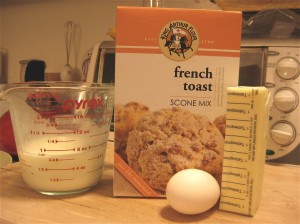 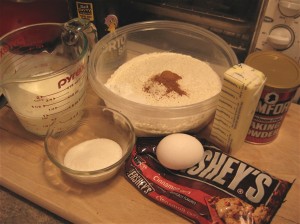 Both recipes used a similar technique.  Press chunks of cold butter into the dry ingredients until crumbly; whisk egg with milk and mix into dry ingredients just until moistened.  Gently press the dough into a circle on a lightly floured surface and cut into triangles (I got 8 triangles from the boxed mix as expected but only 8 from the scratch recipe which claimed to make 12).  I then put the scones in the freezer to bake the next morning: 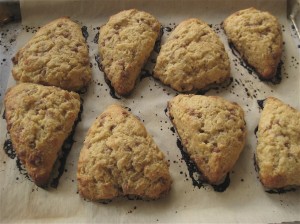 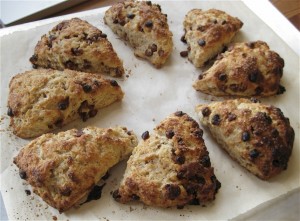 I can’t say I’m surprised.  I’m inherently skeptical of anything that comes in a box and is meant to be baked into a tasty treat.  Both scones were of the fluffy and moist scone camp vs. the dense and dry/crumbly variety, so I feel that it was a fair comparison.  The boxed scones smelled strangely fake (fake-ly egg-y maybe? I couldn’t really place it).  Despite brushing them with milk and sprinkling with sugar before baking (my addition, not directed), they didn’t form any sort of crusty top like the from scratch scones.  The box recommends you eat the scones warm, and if you can manage to not gag from the weird smell, I suggest that you do.  As they cooled, the uniformly fluffy (more like a muffin, really) texture turned uniformly gummy…

On the other hand, the from scratch scones were nice.  (I can’t say great because I really do prefer a dense and crumbly scone to a fluffy one, but that’s a personal preference and it’s beside the point right now.)  These scones baked up with a nice crusty top.  They tasted real.  How do you describe real?  I’m not sure, but if you try the boxed ones at the same time you’ll know.  Real vs. Not Real.  Also, these scones improved after cooling.  Once the steam evaporated, the crumb dried out a little and I had a lovely, subtly sweet, and light scone.  It was no question the one I kept nibbling on, some bits wrapped up in a kleenex and stashed in my coat pocket for later. 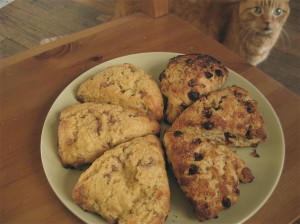 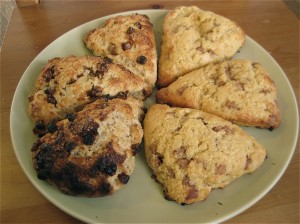 So, my advice?  Skip the mix.  KAF may make the only flour I feel confident using in my kitchen for consistent results, but their box mixes are still just underwhelming box mixes.  This one in particular seems silly.  It requires the same skill to make these box scones as the scratch scones.  The only extra effort for the scratch variety is gathering and measuring your dry ingredients which you probably already have in your pantry (Okay, so maybe not everyone keeps cinnamon chips in the pantry, but chocolate or butterscotch chips would work too).  On that note, maybe King Arthur should hire me.  I think they need a scientist to figure out how to make a box mix that can give from-scratch results (if that’s even possible)…

I have two more mixes to try: Cherry Almond Scones and Chocolate Lava Cake (Mr. R’s pick).  Any bets on the score?  Maybe trying to flavor scones like french toast is just a bad idea and the Cherry Almond will redeem the boxed scone? The Chocolate Lava Cake already has the advantage that I’ve never attempted making molten-centered cakes before despite how fondly I remember the Mohr im Hemd in Vienna.  But Christmas cookie baking can officially start this Friday, so the experiments will have to wait.  Stay tuned…

2 Responses to "A Trip to King Arthur Flour and Boxed vs. Scratch"